Pyker + Musician in Cornwall, ON 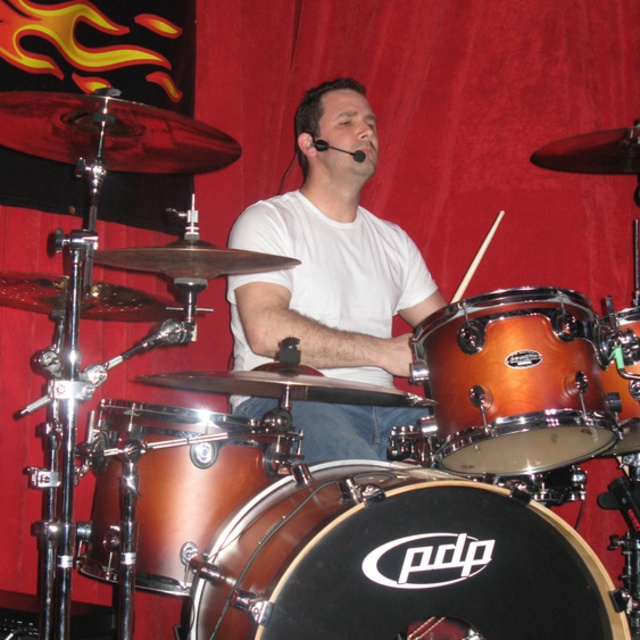 Former dummer & vocalist with Ottawa cover band Spitfire91, featuring strong vocals, big crunchy guitars, solid multi-effect bass, and powerful percussion, just putting feelers out for possible jam sessions or maybe filling a permanent drum spot. Undecided as to how much time I can commit to something, so....

Born and raised primarily in Brockville, Ontario, Canada, 46-year old Scott Pyke was bitten by the groove bug at an early age and was destined for a life of entertaining and performing on stage. According to his parents, initially, the pots and pans were not safe in the cupboard and moonlighted as makeshift drums for Scott. It wasn't until around the age of twelve or thirteen that Scott had found a way to get behind an actual drumset, albeit with some creative thinking on his part which involved trading his weekly allowance for lessons.

At the age of fourteen, Scott hit high school, and with that came the usual attempts at putting a rock band together. With some small amount of success and a few gigs for local youth groups, Scott got his first taste of what it was like to perform in front of a crowd and decided he wanted more. Answering an ad in the local newspaper classifieds lead him to the home of current bandmate Steve Curtis, who, along with his father Don and brother Craig (who now resides in Nashville, TN as a songwriter/performer), were looking for a drummer to complete their country band, aptly named Curtis Country. Although he didn't have a lick of experience playing country, he made the date for the audition and seemed to fit in well on a personal level, while bringing something fresh and new to the country sound that the Curtis's had already developed. For the next ten years, Scott enjoyed major success on a local level with Curtis Country, playing as often as 46 weekends of any given year during that period.

After leaving Curtis Country, Scott found himself being pulled back to his rock and roll background, and eventually auditioned for, and was accepted into local 50's and 60's group The Fabulous Bel Airs. Playing regularly throughout the next couple of years saw The Fabulous Bel Airs and Scott in front of appreciative crowds reaching well into the thousands of people. One particular highlight of this time period for Scott remains the show where he and The Fabulous Bel Airs were the opening act for US touring group Vince Vance and The Valiants. This particular show put Scott in front of a crowd well into the tens of thousands and really confirmed the fact that show business was in his blood.

Sooner or later most groups come to an end of some sort, and so did The Fabulour Bel Airs, which left Scott in limbo for a few years, with several attempts at putting something together to satisfy his lust for being up on stage, but with no real success until the mid 90's when Scott met another local singer named Scott Watson. Quickly the two put together their idea of what a country show should be and together formed the group Lonesome Road. Surviving several different member changes over the next year or so saw the two Scotts finally coming up with a solid and compatible four piece combo that hit the road for the next couple of years. Much success followed, and Lonesome Road learned a lot about the business of being a musician along the way, and this too ended as each member ultimately developed their own ideas of how the band should progress, but not before the band had a taste of what it was like to hit the recording studio to lay down a four song demo entitled Don't Wake My Heart.

The late 90's saw Scott endure more auditions for local groups, before finally ending up as drummer for country singer/songwriter Jeff Callery, where he spent the next three years playing A-Class bars and gigs and festival throughout Ontario. Scott had opportunity to open for such legends as Glen Campbell, Dan Seals, Michelle Wright, Sons of The Desert, Stacey Earle and Beverly Mahood. The end of the 90's saw Scott become and a father to a beautiful daughter, which in turn put Scott into a musical hiatus to focus on his parenting responsibilities.

Screen name:
Pyker
Member since:
Mar 26 2012
Active over 1 month ago
Level of commitment:
Just for Fun
Years playing music:
35
Gigs played:
Over 100
Tend to practice:
More than 3 times per week

Check out myself and the rest of Spitfire91 as we hit the stage at D'Arcy McGee's in Kanata on March 25th! The show is scheduled from 9pm - 1am.

Catch me with Bettin' The Farm as we headline Athen's Farmersville Exhibition for the second year in a row. An all-ages event.

Catch me with Bettin' The Farm as we provide some outdoor entertainment in the village of Charleston Lake, before and after their fireworks display!

Catch me with Bettin' The Farm in Row's Corners Fairgrounds just outside of Brockville, as we do our part in the fight against Cancer. Scheduled to play from 9pm to 10pm, this is a charity event, so come on out and show your support.

Catch me with Bettin' The Farm as we make our Kingston debut at Mustang's Saloon on Days Road in Kingston, ON. Show starts at 10pm, no cover charge.

On the road with Bettin' The Farm to Lombardy for a private gig.