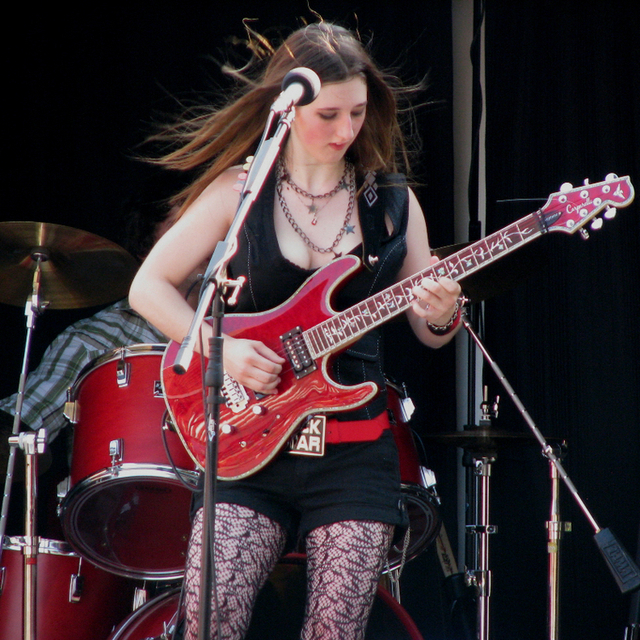 At 19 years of age, Kristen T. Clark has certainly experienced many sizeable achievements in her career. Sharing the stage with Adam Gontier (formerly of Three Days Grace), Brian Byrne (I Mother Earth) and world renowned superstar Rik Emmett (Triumph) have all been extremely exciting(!), as well as performing with Maurice Raymond (The Blushing Brides) and opening for Tom Wilson (Blackie and The Rodeo Kings).

Auditioning to play lead guitar for Shawn Desman in his Canada/US/European tour at age 16 was an immense rush! The audition was flawless and Clark was presented to management, but sadly, it wasn't meant to be; she was advised she had to be 18 years of age to partake. She is extremely grateful however, for this jaw-dropping opportunity!

Freshly graduated from Harris Institute in Toronto in July 2014 (Canada's #1 Audio Production College), Clark is elated to have studied Audio Production, Touring, Marketing & Promotions, Finances and much more with vastly knowledgeable professors who have decades of industry experience such as David Quilico (Sony Music Canada), Bob Roper (Management Consultant to Gowan, Rik Emmett, Styx) and Terry Brown (producer of 10 RUSH albums) among many others.

Words cannot explain the sense of achievement she felt when she was presented with the MusiCounts Fred Sherratt Award from the Canadian Academy of Recording Arts and Sciences (CARAS) and Harris Institute for obtaining 'Top Student' status in her term! Through numerous hours of hard work and committment, she now has the proper tools and knowledge she needs to dig deeper into the industry and continue on what is forging into a very exciting future in the music biz. Graduated: July 2014.

Clark's story began when she was just 4 years old, competing in step-dancing contests around Ontario, Canada. By age 6 she had developed a vision for herself as an entertainer and was entering contests, winning many along the way. At age 7 she was writing her own compositions, had her own band, and was performing so extensively that she developed nodes on her vocal chords and was prescribed vocal rest for a year. Not letting that get her down, she started taking professional vocal lessons with Tara Lyn Hart (Sony) and professional guitar lessons with Keith Robertson (Western Avenue).

Between 2004 and 2008 Kristen recorded many original compositions including Kisses To You, Hold Me Tenderly, I'll Fly Away, I'm Missing You and For The Magic of Christmas among others. Several were released to radio across Canada with many 'pickups' and internet radio play was also seen in the US and the Netherlands. She also recorded a full-length country cover album entitled Grand Ole Classics which she sold at all her performances. As a result, Clark was invited to perform at several venues in Nashville during CMA Fest, two years consecutively. More importantly though, at age 12, she had secured an interview on Music Row with Wes Mayers of Redline Entertainment.

Fundraising efforts were also a major initiative with involvement in the Cystic Fibrosis Foundation, Terry Fox Cancer Research, Kids Help Phone, the US Humane Society, Calling Cards for the Troops and the woundedwarriors.ca organization. She successfully hosted her own almost sold-out fundraiser for Smitty's Christmas Wish Foundation, raising nearly $1,000 for the organization.

Things began to shift in 2009 and 2010, when Clark started getting recognition for her compositions and guitar work. She was presented with the 'Instrumental Music Award/Trophy' at her school and was nominated for the 'Best Young Songwriter's Award' at the Barrie New Music Fest. With this encouragement she continued on, writing and composing Not My Type, Where I Belong, When You Said Yes, Loser Liar Leaver, Not, Sweet Stuff and co-writing Narcissistic Me with producer, Brent Bodrug (Alannis Morrisette).

In June of 2010 at the age of 14, as she continued to perform, write and play with her band, nothing could have prepared her for the major, life-changing breakthrough that came her way. She won an online contest (there were 60 entries from around the world) for a Scholarship to attend a one-week professional songwriting workshop called SongStudio founded by Rik Emmett (Triumph) and Blair Packham (The Jitters). Working with acclaimed, expert songwriters such as Rik and Blair, James Linderman (Berklee) and Allister Bradley made a substantial difference in her future compositions. Undoubtedly, this was the beginning of a genre shift from folk and country to progressive rock.

In October that same year, Clark was shocked and astounded to learn that she had won her first 'Battle of the Bands' competition against 11 bands, performing several of her own originals. To her amazement she was described by the organizers as different, fresh and very professionally organized in her performance. As a result, several months later, her debut rock song Meant To Be was recorded and released to the 50 Top Rock Radio stations across Canada.

Ending the year on a high, Clark was officially endorsed by Mike Carparelli, owner of Carparelli Guitar Co., and was presented with an S4 model electric guitar. This confirmed her guitar skills as extremely notable and potentially world-class.

2011 through 2013 were met with a flurry of 'wins' including two more 'Battle of the Band' 2nd place finishes, an 'Award of Distinctive Merit' for writing a score for a theatrical play, an online fan-voted 'Wildcard Prize' and another SongStudio recognition with the Long & McQuade/Alesis Award for 'Excellence in Songwriting' signed by Rik Emmett. In addition, Clark was also graciously endorsed by Jeff Wesseling, owner of Road Rage Pro Gear.

Fueled from these accolades, Clark continued writing songs adding Jump, and Left Behind to her growing music catalogue. Fortunate to be working with highly acclaimed producer Rob Wells (Justin Bieber, Selena Gomez, and Adam Lambert), together they recorded Jump, which received huge compliments when performed live. She has since had a further co-writing session with Rob at Sony recording studios in Toronto. She also further participated in Skype songwriting sessions with Christopher Ward and James Linderman and enjoyed co-writing at a 4-day professional 'songwriter's retreat' with Allister Bradley, Bunmi Adeoye, Matt Gerber and Mike Butler.

The last couple of years have been quite gratifying for Clark, picking up nominations for the 'Rising Star Award' and 'Guitarist of the Year Award' at The Wire Awards in her home town of Peterborough, Ontario, and has had the pleasure of working with world-renowned songwriting guru Pat Pattison. At her Grade 12 graduation (November 2013), she was presented with 'The Ross Pinkerton Memorial Scholarship' for academic achievement and community service, 'The Vera Briscoe Theatre Scholarship' for bringing talent, commitment and energy to Adam Scott school's plays and performances, and a couple of other awards of recognition for academic efforts.

No 'overnight success' is forthcoming here, but new ideas are continuously being explored, new sounds are being recorded, and a debut album is still in the works. One thing is for sure, this story just continues to get more exciting and is certainly 'to be continued'.

Screen name:
Kristen T Clark
Member since:
May 12 2008
Active over 1 month ago
Level of commitment:
Very Committed
Years playing music:
10
Gigs played:
Over 100
Tend to practice:
More than 3 times per week
Available to gig:
1 night a week
Most available:
Nights

Go to www.kristentclark.com for a list of upcoming events.