The Castor Troys + Band in Hamilton, ON 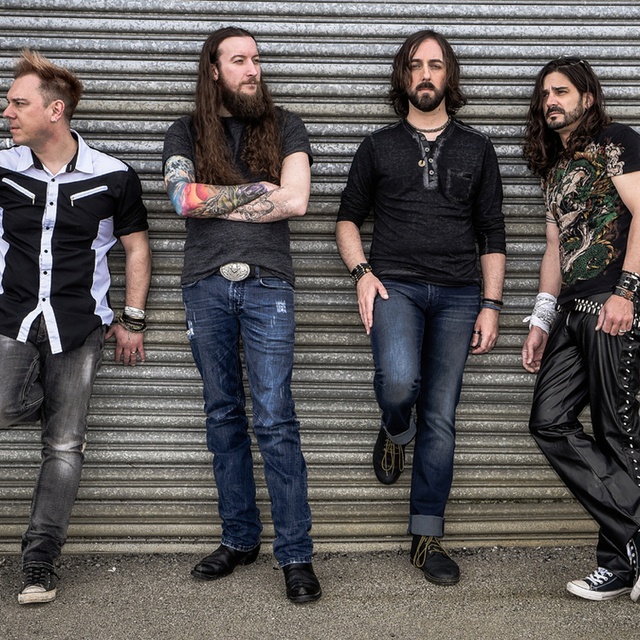 The Castor Troys are a story-telling hard rock band from Hamilton, Ontario. Through lyrics that tell tales of war heroes, bank robbers and clandestine lovers, this intrepid four-piece peddles true stories and truer fiction. Drawing inspiration from bands like Headstones, Social Distortion, Motörhead, The Offspring and Iron Maiden, The Castor Troys craft fiery and infectious songs that draw you in and don’t let go.

Taking their band name from a character in a John Woo film, The Castor Troys are a jubilant mix of hard rock, punk, country and southern rock. “Castor Troy was the villain (played by Nicolas Cage) in Face/Off. He was elegant, flamboyant and stylish, instantly likeable, while at the same time single-minded and ruthless in his pursuit of his goals.” expands the band on their choice of name.

Formed in 2013, they released their debut full-length album “Come Hell or High Water” in May of 2015 and their 6 track EP “Legends Never Die” on November 9, 2018. Working with producer Andre Kaden Black and engineer Tal Vaisman (Ascot Royals) has refined the band’s sound and enabled them to capture the fierce energy of their live performance onto record.

Proven by becoming the 97.7 HTZ-FM Rocksearch 2018 Finalists, The Castor Troys are a relentless team of stage veterans. They’ve played many festivals including the upcoming Burlington Sound of Music Festival Kick-off concert (with Bush, Live, Monster Truck and more). Writing music that is catchy and instantly memorable, The Castor Troys weave tales in an accessible and uncompromising manner.

“You’ll be screaming along with these powerful vocals and air-guitaring these riffs all week long.” – Alt Press

With Dirty Jeans. The debut of the Sound of Music's Club Series!

The album release show for "Come Hell or High Water"

with Live How You Live & Dawn Before Descent

Dickens Pub in Burlington with illScarlett, Panama Red, The Maysides and The Gentlemen Thieves. $15 at the door, or tickets at www.burlycalling.com

The Castor Troys take part in Merriam Jamfest '14 at Canada's Largest Ribfest in Burlington, ON. A FREE family event at the Merriam Stage (Gazebo Stage) in Spencer Smith Park.

FREE family event at Wave Twin Rinks, Burlington, ON. 11am - 3pm with BBQ, live music with The Castor Troys, and The Bauer Experience (try on all the latest gear!).

at Club Absinthe
19+
Advanced tickets are $15

At the Toneland Stage on Brant Street. FREE SHOW!

With The Matadors, The Lucky Ones, Hellbent Rockers and Dirty Jeans!
19+, $10 at the door
9pm doors

Playing Thursday, August 15 at The Corktown. $5 at the door!

Opening the Saturday show at the L'Esco stage. Secret headliner!

The Mad Murdocks with The Castor Troys, The New Outcasts, and Junkie Rocket

The Casbah in Hamilton with Hellbound Hepcats, Chainsaw Lobotomy, The Greasemarks and The Castor Troys

For all food banks, this is a crucial time of the year for everyone to continue giving. Donations drop considerably after the holidays, and we are so pleased to be on board with Keep the Change's annual event. For more information about Burlington's Partnership West Food Bank, and for a helpful list of items they seek assistance in acquiring, please visit www.partnershipwest.org

The triumphant return of The Castor Troys. We're proud to be kicking-off the Saturday Pub Crawl party in Downtown Burlington! We'll be playing at The Dickens (423 Elizabeth Street, Burlington) with the mighty Silverstein, The Penske File, Aerith and Careers in Science. This year's Burly Calling line-up includes Monster Truck, Grade, Saint Alvia, Silverstein, Organ Thieves, The Spicoli's, The Dirty Nil, Jeremy Chambers, The Killin' Time Band, Lo-Fi, The Wooden Sky, Ashley Sloggett and many, many more. Come see why Burlington's scene is the hottest damn place in the country right now.

Spring Music Festival's big finals for the top local bands. $12 advance tickets only for this 19+ show. Contact the band to get yours!

Marshall and Supernova present the Band on the Run Showcase Finals.
Contact Aaron for advance tickets at just $10!

A blazing opening set for a night of partying. Come celebrate The Jones' album release party with us. Hell yeah!
$6 cover charge, includes a copy of The Jones' album.
The Castor Troys open the show around 9pm.