LEFT ON BOWERY + Band in Amherstview, ON 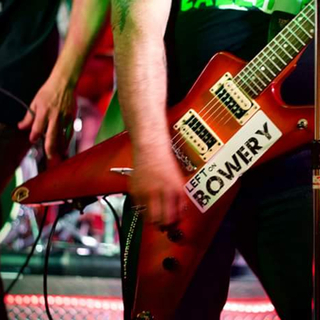 WE ARE A PUNK ROCK COVER BAND & ORIGINALS PLAYING TO THE KINGSTON & AREA MUSIC SCENE. Have shared the stage with big name bands like, ANTI-FLAG, BLACK LUNGS, THE MAHONES, SLAVES ON DOPE & IN MY COMA to name a few, plus local bands like, Goldwing, Sofa king Addicted, The Beta 58's, The Dead Sparrows, The Huaraches, Oakridge Ave, Screaming Sins, E.L.E, Richard Cranium, The Midnight Tryouts, The Albino Structure, Project 29 and so on. You get the point!!!

The name comes from the legendary Bowery of N.Y.C where punk music found its calling in the USA at the famous CBGB's on Bowery Street. The band has plays shows in the Kingston area & out of town. They have received great positive feedback due to their high energy performances. LEFT ON BOWERY is performing punk covers as they show diversity in their music choices, from old school to modern day with a few originals.