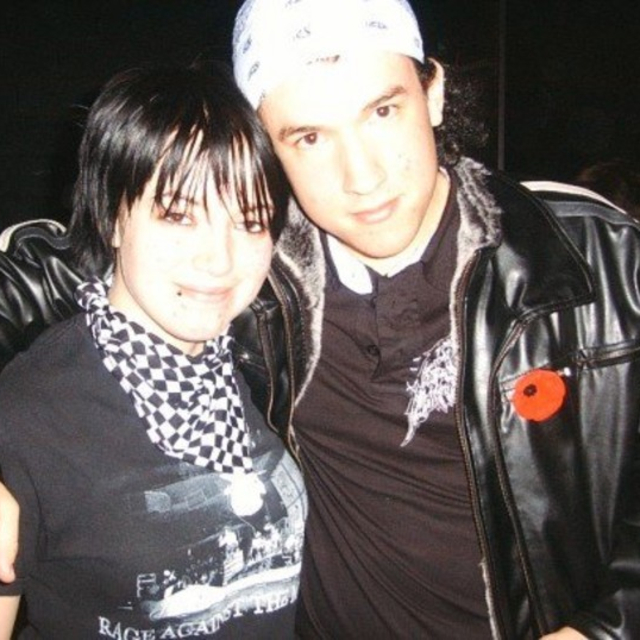 I have been asked to put together a band for a show at alderny landing in late july, possibly as the opener for april wine (not confirmed which band will be the main act). only condition is we need to get a demo to them ASAP.

{MY PERSONAL BACKGROUND}
I've been in three bands. Two ware we just goofed around and jammed, and one where we took it seriously and tried to write and have fun and really do something with it. Take a guess which was the most successful? Correct the third.

I have a make shift studio already set up with plans for renovations to finish the job in the summer, as well as thousands of dollars in recording equipment. Also my father owns an indie record label (Black Rose Music).

I am an avid guitarist, playing for about a year and a half, but dont let that fool you, most people compare me to 3-5 years.

I have three guitars: An Epiphone SG, A Seagul Signature Acoustic, And A Vintage Gibson Les Paul BFG.I have a Renoun 212 Solo Series Amp, and a Micro Cube. I have an SP250 Electric 88 Key Piano/Keyboard. I have a 14 Channel Macki Mixer. I have an M1 Audio USB Interface. I Have Live 6 Studio (took a while to hack that one). I have three Apex Studio Micro Phones (a standard mic, a pencil condensor, and a wide condensor).

{STUDIO}
So the studio is actually set up at my house in Eastern Passage. You'll each probably walk in and laugh, but once people hear the recordings I've done there they generally stop very quickly. It may not look like much, but the quality is superb. The room is going to be expanded, likely in the summer, to seperate the equipment and recording rooms. Currently it's just one room, but i would like to move the softwear set up and mixing equipment to a seperat one.

{MANAGER}
My father has several contacts in the music industry and will be looking to play a managerial role. He personally poored over 4000 dollars into my last indevour, to set up the studio.

He wants to get together with us as soon as he can. He's is not a musical person, but knows talent in every feild, and is a great judge of character. He is a firm business man, and will want to take care of that side of the work, and let us just handle the music. He will want to sit down with us and work out a plan of success, for lack of a better description. Following this plan is what made my last band successful. Dad's really good at this sort of thing,keeping people on track and etc...

He will alos be providing funding in different feilds, and thus has a major say in who will be in the band.

{TEAM WORK}
What I am looking for is some people who will work hard at this and be commited. Level isnt a big deal, you can always get better, although singing talent is one thing you cant nessessarily learn. Your either good or your not.

My big thing for a band tho is working TOGETHER. Too often one person controlls where a band goes, what they cover, and what their style is, when that defeats the purpose of the BAND idea right. If you want to have a
single person's vision for music then go solo, thats my opinion anyway. Everyone needs to be involved and open to playing what ever we want to play. Everyone needs to be involved in the writing. And everyone needs to be
willing to commit. Thats not to say that if you write a song alone we wont play it. It means that I'd like to see everyone writing, and everyone's songs getting played. As well as some collective writing.

{STYLE}
Now i know some of you are going "metal, not rock" but i frankly feel metal is not the way to go due to the fact that it is very underground. As I said hard rock/punk/emo is todays style and frankly I enjoy playing that much more.

So now some of you are saying "if you do that style you're just like everyone else." no i dont want to be like everyone else. i want to come up with our own sound. Im talking covers in the style department. And I completely agree metal shouldnt be underground, but in general it is. And when it comes to performing you want to tailor to a brod audience, that way you have successful shows right. If you play stuff no one has heard of and few like guess what happends, you play to empty bars. I've tried the whole metal band thing, went nowhere fast. Im looking to be in a successful band. IE playing shows in front of THOUSANDS of people, not hundreds. And as i said before we have that oppertunity in the alderny show.

So it seems punk/emo/hard rock is the direction this band is headed, atleast cover wise, as a majority of people interested in the band like these styles. As for our own suond, a band is made up of its influences. For example: Lets say yours are metal, mine are hard rock, the bassist is classic rock, and the drummer is punk.....our sound will end up somewhere in between all of those...

Screen name:
kentij
Member since:
May 12 2008
Active over 1 month ago
Level of commitment:
Committed
Years together:
1
Gigs played:
Under 10
Tend to practice:
2-3 times per week
Age:
32 years

Approx 10 000 In musical equipment. Way too much to list right now.