JimmyDLane + Musician in Vancouver, BC 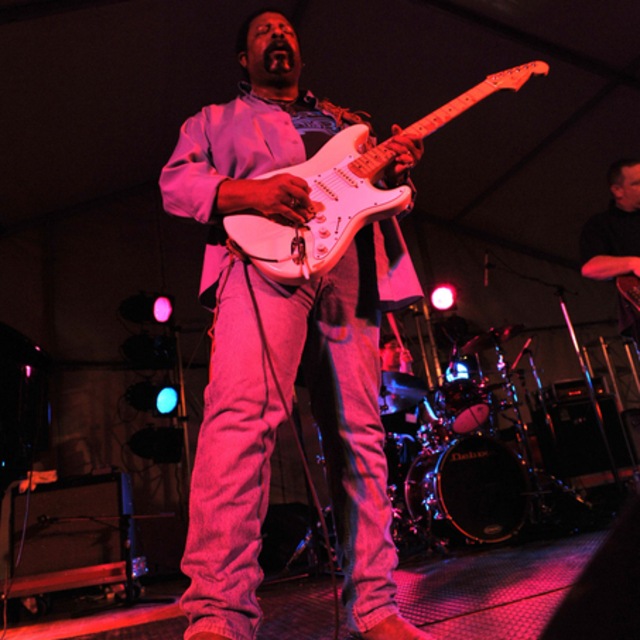 Born July 4th, 1965 in Chicago, he grew up in a household where he became acquainted with a veritable who's who of Chicago bluesmen. Muddy Waters, Howlin' Wolf, Willie Mabon, Little Walter and Albert King, to name a few, would all stop by the house to visit the "old man." Coming from this environment has instilled in Lane the deepest respect for elder statesmen of the blues. "I feel blessed and fortunate, to have known all those cats, and I do not take it for granted."

At the age of eight, he began playing his dad's guitar, which he wasn't supposed to do. "I would break a string and put it back in the case like he wasn't going to discover it," Lane recalls. Shortly after that, Lane received a Gibson Acoustic from John Wayne. The Duke gave it to Shakey Jake, who was Wayne's driver, to give to Lane. "I would try to play along to a Bobby Blue Bland album" Lane states. He also wanted to join in with his dad and all those old cats that stopped by to "drink, tell lies and jam." Lane, however, would not get serious on the guitar until much later. Lane got discouraged from playing after the Gibson got smashed, and didn't play for a while.

In 1983, Lane had a life changing experience. "I was laying on the bed with the headset on, trying to figure out what to do with my life, and that song, "Hey Joe" (the Hendrix version) came on the radio and I heard that song like I've never heard it before".

At that time, Jimmy knew exactly what to do. He took his last $59 to a pawnshop, bought a Harmony guitar and learned "Hey Joe" by ear. For the next four years he worked construction and roofing jobs, but would spend every other waking moment playing guitar. He would play along to blues as well as AC/DC and Journey records.

By 1987 Lane was good. He became lead guitarist of the Jimmy Rogers Band as well as forming his own band, Jimmy D. Lane and The Hurricanes and later Blue Train Running. Lane toured extensively with his dad's band while juggling his own solo career.

In 1993, The Jimmy Rogers Band toured Europe, where they made a stop to perform at the BBC. In '94 they performed at the W. C. Handy Awards and in '95 they appeared on the Conan O'Brien show, as well as the Chicago Blues Festival.

Jimmy made his solo recording debut in 1995. The self titled disc on Blue Seal Records features 12 fine originals and one of his dad's tunes. In 1993, however, he would meet the people who would put his recording career into high gear. During the sessions for Bluebird for Analogue Productions, with the Jimmy Rogers Band, he met Producer John Koenig and head of Acoustic Sounds, Chad Kassem. Koenig saw the Jimmy D. Lane band at B. B. King's Club in Universal City and was floored. Koenig and Kassem got together and Jimmy recorded Long Gone for Analogue Productions in 1995, at Ocean Way Studios in Los Angeles, which was released in 1997.

His second recording, Long Gone, showcases Jimmy?s guitar virtuosity on originals like "Whiskey," "Oh What A Feeling" and the title cut. The Hendrix/Vaughn influence can be heard in his searing guitar solos but listen and you will hear his feet are firmly rooted in the blues. His versions of John Lee Hooker's "Boom Boom" and Jimmy Rogers "I'm in Love" show his deep love for, and respect of blue tradition.

Lane can stretch out on his own, but is equally at home in a support mode as can be heard by comparing his playing on Long Gone to Bluebird. Lane plays on and co-produced Hubert Sumlin's I Know You, also on Analogue Productions, where as he states "You can hear Hubert's guitar, not some guy with his amp cranked up." In fact, it was Hubert Sumlin who gave Jimmy his first Strat in 1986.

Off stage, Lane's positive outlook on life is reflected in one of his favorite phrases "It's all good." This was originally the title of his third release, but changed it to Legacy in honor of his father's memory and the rich blues heritage he grew up with. Legacy, released in May '98, features guest appearances of blues greats Sam Lay on drums, Carey Bell on harp and Sumlin on guitar. It also features the last recordings of Jimmy Rogers, who played on "One Room Country Shack" and "Another Mule Kickin' In My Stall." Jimmy is proud of all his work with his dad, but this one touches him deeply. "I take great pride in the fact that the last time my dad picked up a guitar was to help me out on my project."

Jimmy's fourth release,It's Time, could just as well have been titled It's Overdue. It's long been time for one of today's most powerful and expressive musicians to break the chains of relative commercial obscurity. Time to seize the reins of blues leadership, just as his father, Jimmy Rogers, did in the 1940s. Masters Eddie Kramer (engineer for Hendrix, Zeppelin, Woodstock etc.), Chris "Whipper" Layton and Tommy Shannon (of Double Trouble) and Mike Finnigan (organ in the bands of Etta James, Taj Mahal and CSN&Y) are all onboard to give Jimmy the nudge he needs to clear the launching pad. It's Time. In 2009, Lane's song " Tears Without A Shoulder" was featured in an episode of the popular cable T.V. show "In Plain Sight".

Lane's music is on the rocking side, but is tempered with just the right amount of blues tradition. As Lane states "you can have too much water and too much fire, but with the right amount of both, you can boil an egg." Jimi Hendrix may have moved him to buy a guitar, but Hendrix is just one influence. Lane is a passionate blues singer, songwriter and guitarist with a deep respect for "all those older cats who were there".

Looking to book my trio or...sit-in on gigs with serious, gigging blues or blues/rock bands in Vancouver or throughout Canada . I'm also available to fly in for gigs. Visit my website and click on "Contact" to drop me an e-mail, if interested. (www.jimmydlane.yolasite.com)