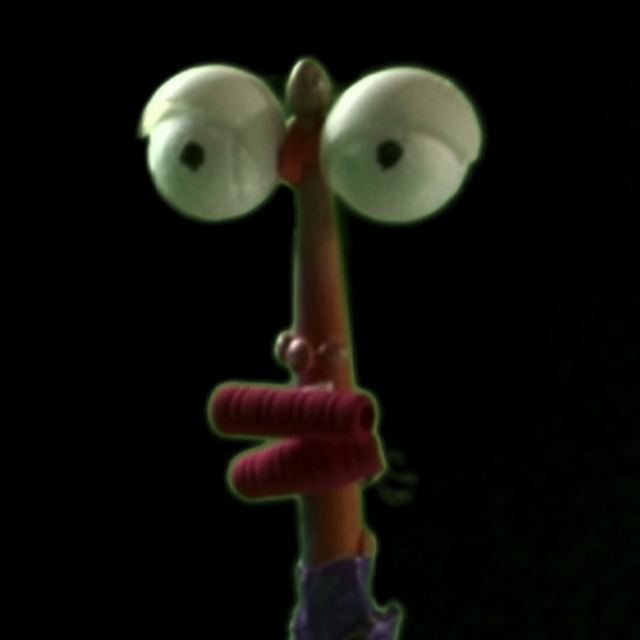 We are interested in collaborating with people in any number of ways.
1. From electronic music producer (you) to aspiring puppeteer (you). We can use the right puppet-friendly tracks if you got em.
2. The easiest and quickest way to begin is to meet and let us interview you over zoom (what kind of music, how you got started, advice to kids) for posting on social media.
3. We need every kind of instrumentalist and will introduce the musical instrument you play in a number of ways, including you playing/jamming with CanSticks and Jett if you are available to do so on video.
4. Playing an instrument you would be either "puppetized" or "miniaturized" to fit our format (see, e.g., our fake subscriber). Don't you want to add "puppet collaborator" to your list of musical heroics?
5. CanSticks and Jett are both drummers and could use a third. Don't worry, including puppet-sets there five in our studio. We love to interview drummers.
6. Keyboardist to fill the role of OctaSquid.
7. We are happy to work from your music and need drum-less and vocal free tracks.
8. To make better videos we need a Collaborator with expertise and skill in Final Cut Pro. To date everything we have produced would be considered a "live" video, i.e., no post production or editing. We would like to improve our videos using Final Cut Pro
9. TBD
10. Subscribe to CanSticks and Jett Kidds on Youtube or tell you kids about it. We have 5 subscribers at the moment and we're pretty sure one of them is fake.

We typically post on social media weekly as CanSticks and Jett on YouTube and Facebook. Everything remains Kid friendly and we have just started a CanSticks and Jett Kidds Channel on Youtube and regularly post on Facebook (@CanSticks). At the moment we are on a brief hiatus for cool studio improvements that will result in some awesome footage. We are looking for anyone who can help distribute videos on social media so if you know how to Insta, Tok, or Tweet we could use some help. See below for other software packages that might be used collaboratively from a distance.

Screen name:
CanSticks and Jett
Member since:
Jun 09 2021
Active over 1 month ago
Level of commitment:
Very Committed
Years together:
1
Gigs played:
Over 100
Tend to practice:
More than 3 times per week
Available to gig:
2-3 nights a week
Age:
23 years

the Muppets, Sesame Street, Mr Rogers. Musically we like Pop, Jazz, Rock, Latin, and Jett even likes a lot of old Country.

Outside of music our influences are to work collaboratively while accepting differences among people. We are prosocial and community oriented.

Some puppet characters still need to be cast locally. This would likely require a local (Halifax Regional Municipality) person to fulfill the role. For example, OctaSquid is an un-cast keyboard playing squid and will require someone who can play keyboard, ideally in HRM. However, we are also seeking individuals in "remote Canada" including Nunavat, Western Territories, and the Yukon. Certainly, for example, you can edit shared files in Premiere/AfterEffects/Motion/Logic/Etc from anywhere in Canada. Even some puppet stuff might be fun to Zoom In from a remote Cabin in "Helicopter" country.

Of course, in "real person" terms we are two people who have been meeting several times a week for six months; one puppeteer for each of CanSticks and Jett. We have a third person -- the only educated professional actor -- who stands in when needed. We need additional local collaborators to help bring musical puppets to life. We just expanded our studio to accommodate more puppeteers within a puppet-sized stage. And we've added specialized stages for model, train, and drum work. During expansion the studio was redesigned in some unusual ways for filming in 360-degree video.

Both of the puppeteers behind CanSticks and Jett are drummers and would like to collaborate with a drummer who is interested in playing some percussion, e.g., latin, funk, or jazz style. But, of course we are interested in bass, guitar, keyboards, sax, trumpet, and any collaborative ideas you have.

Unusual gear people don't usually have. CanSticks himself is a patent-pending drumstick and touch-screen controller and, as such, is quite unique. Additional innovative musical equipment is presented as puppet characters to help people understand these new musical devices. OctaSquid is a piece of high-tech av gear. Hatts is an entire playable drumset. Equipment-wise, these are the most innovative Canadian musical puppets on the most innovative 360-degree stages you are going to find. The cast represent a few very innovative patented devices.

In terms of playable gear upon which collaborations may be based: CanSticks is an Alternate Mode (KAT) endorser with a couple MalletKats in the Studio connected into sound modules (TD10, R8M, D4, P3) and MainStage with the The Nord Stage 3 at the heart of the system. We are happy to accept patches and/or samples for these devices and will provide appropriate credit if we use any. Any Nord Instrument files that Mac Software includes Premiere and the full suite of Adobe products for video and media development. A brief segment uses the software Doodly. For music we are using ProLogic but can accept audio collaborative files in any standard format.

Finally, in preparation to film children's educational programming (music) we are currently focused on promotion of the program -- to us this means making a really good product that will appeal to both children, parents, and adult learners. So our music programming is eclectic and varied. For example, we employ footage from a real submersible submarine (to 300 feet depth) which uses our version of "musical sonor" to teach about different intervals. Of course, the Sub is looking for treasures and Sea-Monsters (Ionian, Dorian, Phrygian, Lydian, Mixolydian, Aeolian, and Locrian). But we digress. Other interesting features include miniature models, areal video footage and "field trips". We even have trips into space. Providing an alternate to a sea of brain-numbing computer-generated animation is our goal.

Anyone interested in collaborating on any part of the tech side is encouraged to reach out to us. For example, if you only wanted to make a few Doodly videos (they are pretty quick and easy) that would be acceptable. Interesting video footage that can be used for our "field trip" portion is also needed (it need's to be shot by you).