The Alibi + Band in Montreal, QC 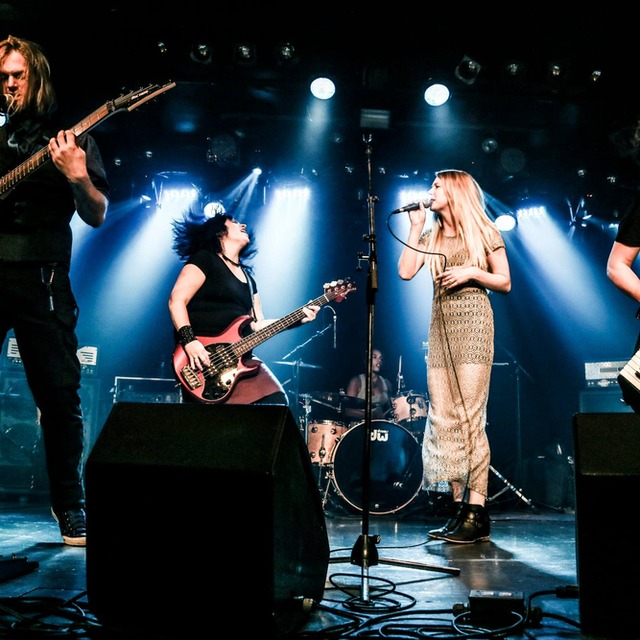 Even though The Alibi is quite recent, their musical journey actually begun in the summer of 2011 when Liam and Johanie started recording homemade demos. In order to play their original songs at live shows, they looked for other musicians and met Hyrum, who became the permanent guitarist of the band. They also met Karine, who showed interest for the music, although she didnââ‚¬â„¢t become part of the project at the time.

In summer 2012, the band jumped on the opportunity to open for an established Torontonian rock band. Eager to perform live again, they recruited a singer within a month, while a good friend of theirs filled in on drums. After breaking the ice at Petit Campus under the name &#258;â€ therState, the young line-up was then joined by a new drummer and played a couple more shows. Feeling the needs to practice more often and to refine their signature sound, they moved in their own rehearsal space in downtown Montreal.

During spring 2013, the singer and drummer left, leaving only the 3 original members to take care of the project. In order to keep their creations moving forward, the then incomplete line-up started working on lyrics, resulting in the songs you hear today. Still in touch with Liam, Karine expressed her interest and became the bandââ‚¬â„¢s new drummer, while friend and former bandmate Gen joined the team as lead vocalist. The Alibi was born.

For the following year, the 5-piece band played several shows around the city, including an opening spot at Le National for good friends October Sky and Shine Lion. They also recorded updated versions of their original songs, as well as brand new material. During summer 2014, Gen left the band in good terms after moving out of town. The remaining members then started looking for a new lead singer and met Nicole, who quickly became the voice of the project.

The band felt like it was finally the right time to hit the studio and recorded their first 5-track EP, Break the Distance, at Silver Wings Studios. Since then the band has played a handful of shows including opening for Dutch band Delain on their world tour at Foufounes Electriques and also opening for the up and coming band Slaves at Cabaret Underworld. Now The Alibi continues to move forward with their musical endeavors, booking live shows and creating new material to bring to their audience.