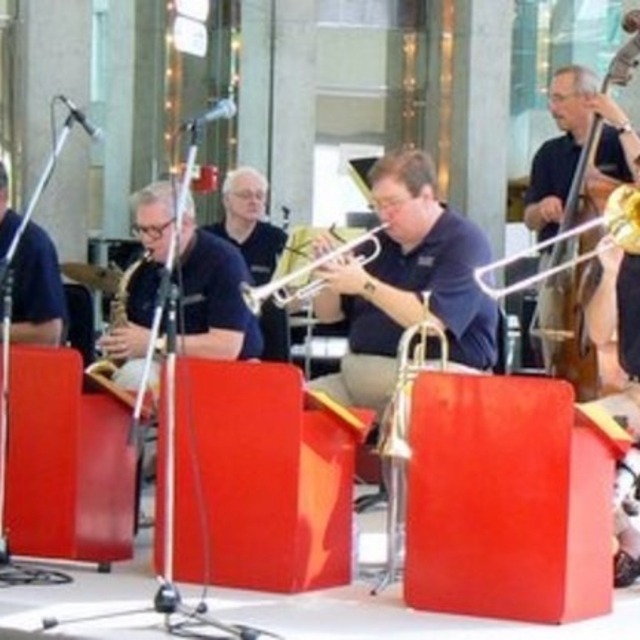 The Peter Banting SWINGTET
This small seven piece orchestra, based in Ancaster, Ontario, was formed in 1999. The group’s instrumentation includes: guitar, bass, drums, trumpet, alto and tenor saxophones, and trombone. It is a small band with a big band sound.
Its members are all experienced professional musicians, who have performed in a variety of musical settings, including pit bands for musicals, marching bands, dance bands, concert bands and symphony orchestras. They got together for the pure joy of playing. Soon the SWINGTET was in demand, playing at fairs and street festivals, at dances and weddings, and at commercial functions.
In some dance and concert settings the SWINGTET is augmented by a vocalist.
The SWINGTET plays the happy, buoyant and melodic popular “standard” tunes of the mid-twentieth century, the big band music that was so captivating during and after the second world war, and the ever-popular Broadway Show melodies. Their music is bouncy and lyrical -- the stuff you can hum, sing or whistle, such as “C’est Si Bon,” and “Fly Me to the Moon.” Their music is infectious.
Seniors especially can enjoy and relate to SWINGTET music. It is the music of their generation. The band has performed at Roy Thomson Hall in five annual RBC Seniors’ Jubilees. The group has entertained in the Ancaster Fieldcote Park Summer Concert Series, and at three annual Locke Street Festivals in Hamilton. The band sets aside Wednesday evenings for performances at Golden Horseshoe region retirement homes.