The Kristy Jenkins-Rick Adamson Band + Band in Gravenhurst, ON 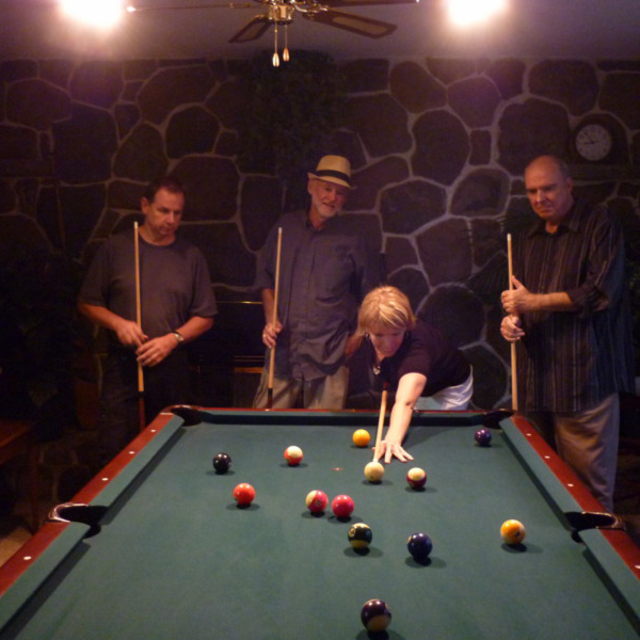 For years, keyboardist Rick Adamson had longed to get back to playing the music he loves -- jazz. Since moving to Muskoka a few years ago, he had been playing with some excellent local blues bands, but he missed the challenge of jazz. Back in the day, Adamson led a piano trio that worked Toronto's top hotel lounges and jazz rooms. Says Adamson, "While Muskoka is loaded with great blues, rock, and country pickers, the area is a little short on players who can handle jazz." Over time, however, Rick met two outstanding musicians -- bassist Mike Bloom and drummer Wayne Hill -- both of whom were more than up to the task. But there was still one member of the band missing. "I wanted a lead vocalist for the band," says Adamson. "But not just any vocalist. Someone who could handle a wide range of musical styles. Everything from pop and jazz standards to greasy down-home funk. A female singer with enough class to add a diamond sparkle to a resort's cocktail lounge or outdoor patio one day and enough chops to blow the roof off the local pub with us the next." It was a tall order, probably too tall for a small community like Muskoka.

But then, in the spring of 2010, Rick heard Kristy Jenkins, a singer originally from Kitchener, Ontario, who was now living in nearby Orillia. Kristy, like Rick, had most recently been working with blues acts, and she, too, was anxious to stretch out. Says Rick, "The minute I heard Kristy I said to myself, this woman sounds great on blues, but she should be singing jazz standards as well. She has that Diana Krall, Katie Melua kind of clarity to her voice with a behind-the-beat lag that many of the great jazz chick singers have." Luckily, Rick uses the word "chick" only when talking to himself.

The Kristy Jenkins-Rick Adamson Band cover a wide range of styles -- R&B, pop, smooth jazz, and hard swing -- all with a distinctive bluesy feel and funky groove. "Our philosophy on stage," says Jenkins, "is to have fun. Because if the musicians aren't having fun how can they expect their audience to be enjoying themselves?" Adamson adds, "Of course, beer helps too. And comfortable shoes."

Carl Fenwick, the tallest horn player in the band on the Titanic and the last guy to stop playing.

An optimist to the end, Carl's last words were, "Hey, guys, the redhead in Lifeboat Number Six is giving me the eye. Looks like tonight's gonna be my lucky night."

Carl, a tenor saxophonist, used to boil his mouthpiece to kill the e-flat coli.

Carl was so hip that when he walked into the ship's nightclub, instead of ordering a gin and tonic he would order a gin and subdominant. And then he'd take it to the bridge.

Pants. Loads and loads of pants. You can never have enough pants. And maybe a nice hat.