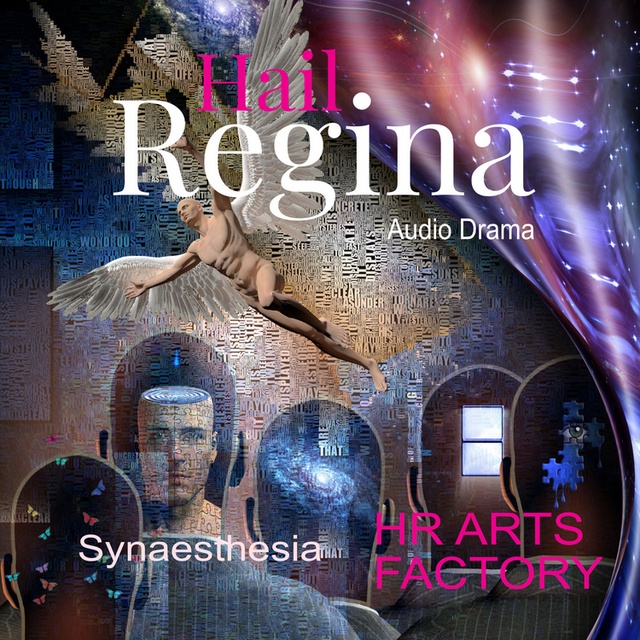 WELCOME
HR Arts Factory (HRAF) is an arts-based, AV workshop-studio. Although based in Australia - HRAF is looking to work with like-minded, skilled audio & video artists in Canada & the UK - as Seasons 1-3 are rolled out in 2022-30. The story is set in a Westminster inspired dystopia of 2025-30 and is a comedy-satire of political and human 'romp'. There may be an unconscious influence of the 70's 'Monty Python' series also. More info: hailregina.com

WHATS NEW:
SYNAESTHESIA (9.50)
The track is a scripted word-theatre performance by actor & voice-artist, PJ Williams. The lyrics are extracted from Season One. The performance displays the humour and dystopia embedded in the series. info: www.hailregina.com

LYRICS:
If we Ignore Justice and Liberation, then Futility, Contempt, Control and Fear - and the Tabernacle Martyr - will see the Melting Saint - watching the Peephole Priest, ‘eat’ - the Atomic pigs.

As they Transfer the radiation from the Botanic Dolly ewe - they can take Revenge on the Electrodes Treatment. Then they will make a Submission about the Poverty Plan - for the Flagellation Dispatch Boxes - and the State Ranking Register.

In the Dominus Regis, they watch the homeless in debt-internment camps - after the Humiliation Inquiry has looked at Smog Death. The Hand of the Cleft Palate - Triggers Collective smiles at the Gravolent Suffering.

It is the Medicated - who Disperse to save the statue of the Prodigal Sinner. They cry out Bless you. They Chant Ganglands Engorgement Songs for the portly flagellant monk. They Hope the Smog - and the Weeping Heel - can Spew the Goat from the Atomic Beefeater Guests. They have Stunning Blasphemous Lips sitting under their Night-Mitre Rectory Feathers.

And the Rebuked Hornsmen - Radio all the Asthmatics - to Warn the Young Inferiors, not to Clean the Enemas - once they are Satisfied the Aerial Choir has provided Sherrie - with pictures of War Spaniels, engaged in Chromatic Licking - underneath the Vibraphone Warts.

The Archdeacon Delays his Frown to help Octavia and Rhapsody with the Furious Acts of God, inside the Great Economic Crash.

The Commander Forecast shows Perceval Lamb in the Hammerehead crane of the Thallium Meatport, buying Transition Synthetic Plumes - so that the Mood Silhouette Gargoyles will be Envious of the Altar Flower Foyer. It is Mandy Fagan who Purged the White Gloved Clapper Balls, while the Squeaking Noviciates learn to Huddle Beneath Gregorian Picket Fencing.

The Caring Trans-gender Plumes Disguised the Skeleton Closet so its secrets Trigger Happy Oligarchs to pat the Compulsive Faith Dog.

“It” - Recognises a Flagellation chamber.
“It” - Confuses Counselling, so that Washing Feet causes an Envious Attorney-general in Whitehall's Grooming Salon - to run Private Errands with Toe Mania - and thus Disturb the Useless Crannies - as they Patronise State-leader Bustwick - and the Rational Promotion of the Mendacious Plan.

An Androgynous Operator at the Intersection is visioning a Flawless Helmeted Traumatist. He puts on a Skin Harness. He Grips the Enthroned Body Politic, whilst it watches Jack Spooner eat the Bread. Eat Up Jack. You are excused. Hurry Back. Don’t miss the meeting. The Bowl Accused them of Swallowing a Toast Blade so the Chamber can Demand the Members have the forbidden fruit.

They Hobble Beyond their Polarised Arsenal Glasses Grim with Limbo Honour and Emotional with Governor Graves in an Embittered Coma. Nem-but-al Entitlements Compromise their Melancholy.

The banished inferiors in the Capital have Obliterated all Ego ping-pong - and Imperial Queens, so that the Outer Circle is engaged in prolonged Laughter.

As the Grimacing Beggars Gossip in the Camps - the Homeless Shout. They shout Safe Nesting Slogans to Five Thousand Rapturous Export Beef Chickens - and Joke about cumberous funds in the Ganglands.

He is Behind the Laundry Eyes. The Automata Couple have a Straight Voice as the Group of Indulgences Say there is no more Electronic Pregnancy Workshops…
Or a Baby Constitution left to affect the Floodlights Confidence in the Dominus.

The Glittering Scuffle Chain Camouflage Smelly Feet Scorning the Lost Arm as it moves along the Conveyer. The Brimstone Blood Beef Batch Bones have Towelling Greyhound Sausages that foreclose on the ‘Reculsant’ System. The Lesson Discerns Danger.

The Daily Gravel reports Bananas acting as unchecked complainants.
There is Virulence Authority and Protection for Peacock stew as the State Flounces Officials to hit the Young Streets and the Blue Markets in an Anguish to Avoid the Boundaries of the Gospel Puritan Revelations… (fade)

OTHER
An original, "Splashdown John Glenn" released in 20 Feb 22 to support the 60th anniversary & celebrations of the historic orbital flight - of John Glenn in his titanium capsule, Friendship 7 on 20 Feb 1962.

SYNCHRONIZATION LICENSING
Currently HRAF is producing a number of cover & original - tracks, for the purpose of seeking (as required) - synchronization licences - necessary to clear the cover recordings for incorporation into the scripts and audio-visual assets, built for the hailregina project.

Additional experimental AV content is being demoed - for the futuristic hailregina stage show.

Season 2
A new cover -Thinking 'Bout You - composed by Dua Lipa & Adam Argyle is completed for the hailregina project. An m4a of the demo has been uploaded here.

VOCALISTS
M & F vocals required - looking for specific voice types - currently am looking for a voice that is similar to Celeste Prince and or Dua Lipa as 2 voice examples. If you are an experienced vocalist, please drop us an email via this site - a bit of audio of your sound - would be useful (fidelity not important) and we'll get back to you. Interest is welcome.

These would include the late 60's to mid 70's experimental music. Other influences come from film. Examples include Motion Pictures such as "The Insider" - music by composers Lisa Gerrard & Pieter Bourke and Graeme Revell and "Ex Machina" - music by composers, Ben Salisbury & Geoff Barrow.

Fully appointed project workshop-studio for most forms of experimental recording and arts based on-line collaborations. Set up is in Logic.

RATES
HR Arts Factory hires artists - on a normal per session rate. Alternatively, some prefer to have long-term engagement with the studio, and if invited, can formally register as participating artists, for inclusion and sharing - in Aggregator royalty disbursements. Payments are quarterly.