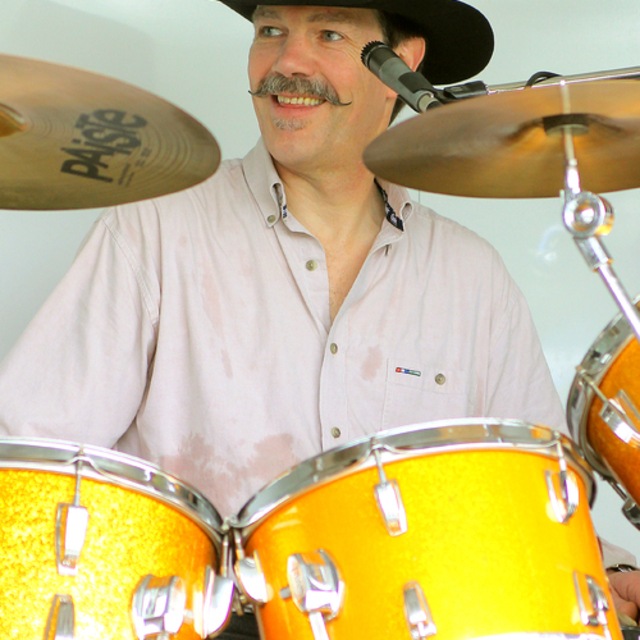 Born and raised in Prince George, B.C., Digger Dave first picked up a pair of drum sticks at the age of 12. By high school he was playing in six different bands; the school concert band, stage band, and pit orchestra, then outside of school; the Legion Pipe Band, a weekend country band and his father&rsquo;s old time band.
In 1980 he moved to Alberta to pursue a career in music, spending most of the next fifteen years playing on the road throughout western Canada. Some of the bands he played with over the years were; Duster, Jeanette Lee and East Coast, Williams and Pelletier, and Momentum, recording with each one of them. In 1996 he settled in Edmonton and continued to play locally with Jimmy &ldquo;C&rdquo; and Night Wing and most recently with Doug Bishop and The Hurtin&rsquo; Horsemen. Digger Dave&rsquo;s reputation on drums and harmony vocals is well established and he is often referred to as a &ldquo;first-call&rdquo; freelance drummer by many local musicians.
Over the years he has played every type of venue; from a Barn Dance up in the hayloft above the hog pens below, to the Klondike Days Parade, to the Nashville North Stage at the Calgary Stampede grounds, to major festivals like Big Valley Jamboree. Along the way he has played with, and for, many great musicians such as; Al Cherney, Dick Damron, Ivan Danes, Pam Tillis, Tracy Bird, Adam Gregory, Jess Lee, Kenny Hess, Nathan Cunningham

For Drumming; In high school stage band my hero was Buddy Rich, then after moving to central Alberta my influences were a couple of local drummers; Kent Cadman and Randy Cross.
For Harmonies; As a teen I sang along with the high harmonies of Little River Band, Super Tramp, any pop rock of the day. I got my own vocal mic when I was 20 and started singing back-up vocals to country songs. I have never been too interested in singing lead vocals, because I know the importance in good harmony back-up.