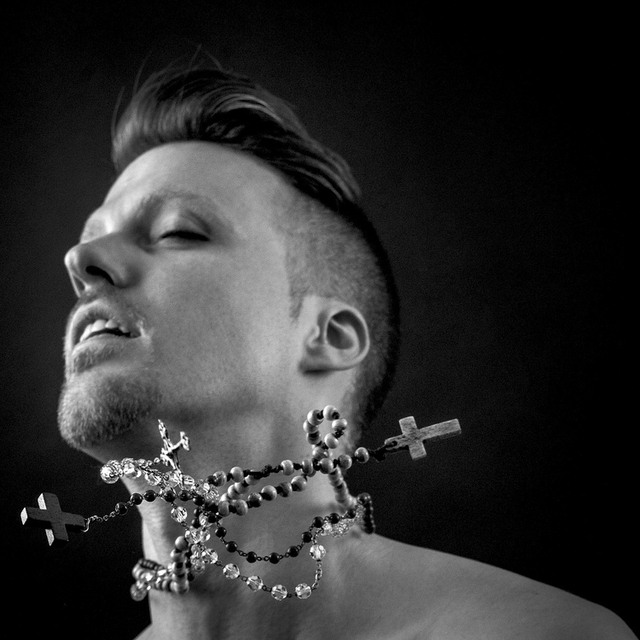 Love is an act of War. And as with any war, there are winners and losers, each dictated by the strategies they employed during battle. A "blitzkrieg" is a battle strategy where an attacking force spearheads a breakthrough in the enemy's rear flank through a series of deep cutting attacks, then circles and destroys the remaining defenses through speed and surprise. Is the warfare of love any different? Do we not attack our lovers at the weakest points and bulldoze through their defenses? It is this concept of "love as warfare" that Danniel Oickle has explored on his much anticipated new release, Blitzkrieg!.
Oickle revels in genres as different as pop, industrial, blues, and cabaret and blends them to create a cohesive yet "genre-busting" signature style (Simpson, The Ottawa Citizen, 2012). Taking inspiration from WWII recordings and imagery, Blitzkrieg! has been divided into two equal parts: The Attack and The Aftermath. The Attack (songs 1-7) is focused on beat driven anthems, direct and empowered lyrics, and culminating in a climax of vocal harmonies. The Aftermath (songs 8-14) is more raw, stripped of the calculated bite of The Attack, wallowing in the different subtle shades of the emotions surrounding love, and finally closing the album with an instrumental version of the vocal climax of part one. After the battle of lovers, there is nothing left to say.
Oickle carefully selected three cover songs to add to the original work on the album. Marilyn Manson's "The Dope Show," takes a classic glam-rock anthem, peppers it in doo-wop, and draws out the concept of love of fame and fortune, the 15 minutes of self-love that Warhol believed everyone would experience. In "How Insensitive," Oickle takes the classic jazz number and forms a direct stand on the lyrics with monotone style vocals and minimalistic music. Lastly, "Sex and Candy" completes the trifecta and leaves the performance naked and raw, with only a hollow antique piano tinkling in an empty hall.
Containing many collaborations, Blitzkrieg! is Oickle's most ambitious, yet cohesive, release to date. From the poetry of Aileen Martella (author of The Drought) on "We Interrupt Your Regular Programming to Bring You This Important Message," to employing vocal cloning of his sister on "The Dope Show," a-tonal repetitions by Bon Bon on "How Insensitive," deep creole inspired harmonies by Emmanuel Simon on "My Heart Has Teeth," the masculine-vs-feminine counterbalance of C.C. Trubiak and Olexandra Pruchnicky on "To My Love," to "Wild Things" recorded through a pen-pal relationship with multi-musician Daniel Lockhart, Oickle was inspired to create an album ripe with variety and yet resolute in its presentation.
The "Electro-Poet" has outdone himself (Julien, RG Magazine, 2011). Blitzkrieg! is destined to be considered a seminal work for a controversial artist who refuses to be ignored. As the last breath on "For Unlawful Carnal Knowledge" fades out, you'll want to start the battle all over again and let the music find every chink in your armor.

[Danniel's previously released twin albums "The Corruption of Flesh" - EP (2011) and “Poison Apples & Other Delicacies” (2011) are a culmination of tactile beats, thought provoking lyrics, and intense performances highlighting the theatrical style of his music.]