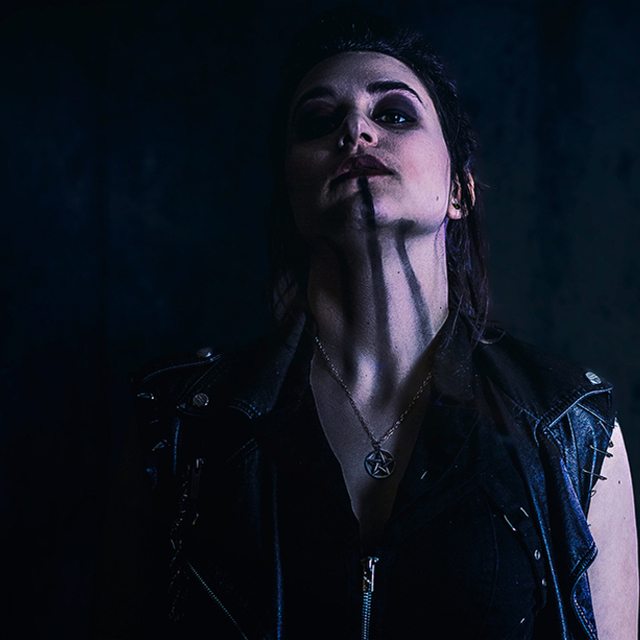 Although never confident in her musical skill and ability, and never thinking she would have anything to do with it, Annie Slaughter soon found herself loving music. Analyzing everything she liked about certain songs, beats and riffs.

Starting music on the acoustic guitar, Annie quickly moved to the bass and was in love. The deep sounds and grooves produced by the instrument had taken her to another level.

Continuing with the bass it was only a couple of years after that she had started experimenting with drums. Offering a friend assistance she had landed a spot in the final line-up of the Toronto based punk band The Reconsidered. Getting used to the drums Annie was soon on a different plain of the rhythm section within a band.

With The Reconsidered and the Toronto based metal band All That Angels Fear along with WAVELINE. Annie Slaughter has had the privilege to rock many known stages within Toronto's core. From the good old El Mocambo, to the amazing REBEL and Opera House. Venues in between included The Velvet Underground, Sneaky Dee's and The Hard Luck Bar.

Her knowledge had expanded even more, her eyes opened to the genre of Punk. With The Reconsidered eventually coming to an end Annie Slaughter didn't stop. Soon All That Angels Fear had been formed and she had her mind set on playing bass.

Doing so she has brought much more to the table than even she herself had expected. More complicated basslines, groovy pieces and music definitely worth head banging to.

With her mind back in the game Annie is ready for the next step within the music scene in Toronto.