andypacheco + Musician in Mississauga, ON 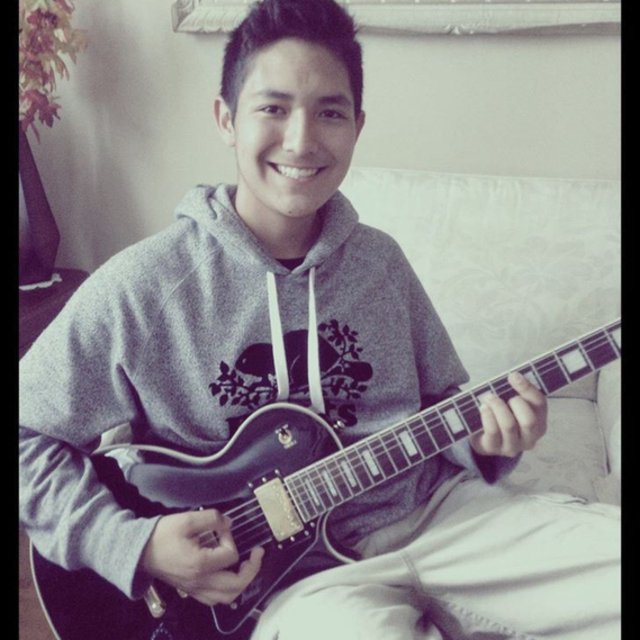 Hi, I am Andres (Andy) Pacheco and music is a part of me since I was a very young kid. One day I decided to pick up a guitar and as soon as I strummed the first chords my whole perspective of life changed. Since that day I decided to become involved with music and nothing else.

He was borned on April 10, 1998 as Mauricio Andres Pacheco Evia in La Paz* Bolivia, therefore the name of his first single*.

He started his music career in his home country at the age of 11. With the help of one of his friend, they begun a duet. At that time Andy had the chance to meet Paul D’Ianno, the first lead singer from Iron Maiden.

When Andy turned 12, his parents decided to immigrate to Canada. He had to put an end to the duo project but never moved far from his friendship and the music. A few months later after settling in Toronto, his dad bought him his first electric guitar. He started playing it by himself, learning through the internet and some books. His parents realized his hidden talent for the strings and they got him enrolled to private guitar lessons in a community centre closer to his home. Andy started playing under the influence of: Slash, Joe Perry, Kirk Hammett, Jimmy Page and Jimi Hendrix. Also, he learned the classic guitar riffs like: Sweet Child o Mine, Enter Sandman, Black Dog, Purple Haze and many others.

When Andy was 14, He started another band with the support of two friends and the band was named “The Mess“. They performed at the Holy Angels Talent Show and came unquestionably number one. They recall the great Schools Out tune from Alice Cooper hitting the crowd.

The same year, Andy met his second guitar teacher named Dragan Petrovic. He encouraged and motivated him to play any style of music in guitar. After a couple years of playing and jamming together, Andy with the support of his teacher started the solo project. Andy recorded a demo which it turns to be his first single named “The Streets of La Paz” and produced by Dragan. He was 16 at that time.

With a few coins on his pocket, Andy did his first tour in South America promoting his first single. He sold 50 CDs and played in different venues during those two months. Also, he had the chance to meet great people and great musicians on tour as well.

When Andy returned from his trip, he moved to a new neighbourhood in Mississauga, and with the ideas learned from his tour he decided to continue with another projects. Some of them include getting a job to buy more guitar equipment, create an online guitar store, teach on how to play the guitar and most important, he started working in a new song named “La Clefa”. Nowadays, he is delighting the town of Mississauga blasting Rock ‘n Roll & Blues music… - woodman .