ANTI-HERO + Band in London, ON 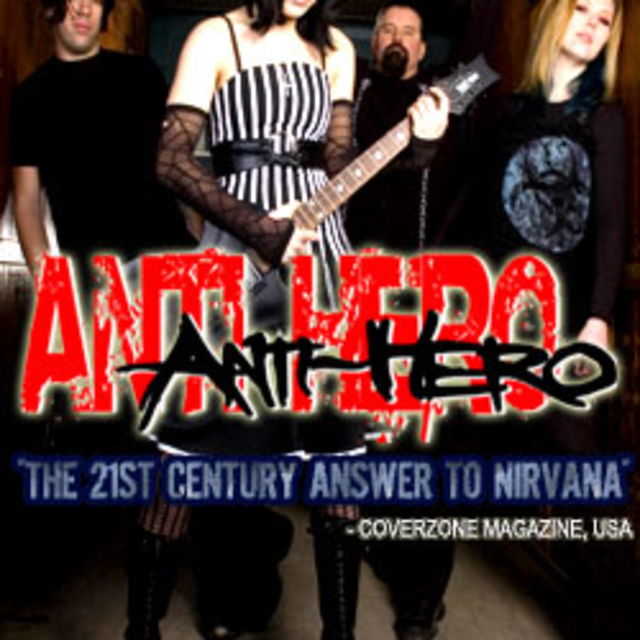 Keeping her mouth shut is something that ANTI-HEROâ€™s frontwoman Rose Perry has never been able to master. Growing up as a troubled and confused youth, music was the one outlet through which she could gain total acceptance. Never succumbing to negative temptation, Perry sought refuge through her artistic endeavours in hopes that the experiences she went through would one day serve as inspiration for her listeners.

"ANTI-HEROâ€™s music is refreshing. It motivates me to be strong and confident." - Amelia Favata, Creator, ANTI-HERO Streetteam Leader

Never anticipating that she would end up the leader behind a rock and roll phenomenon, Perry, unlike other rockers, maintains humility and takes the time to show her fans how much they are appreciated.


"Anti-Hero's live shows are loud, obnoxious, a little silly at times ... you canâ€™t ask for anything better than that. Anti-Hero always go out of the way to make their fans feel special, which is rare these days in music."
- Patman Coates, Official ANTI-HERO Bitch

Acting as not only a band comprised of four extremely talented musicians, but rather the voice of a generation, ANTI-HERO has captured issues of societal prominence through the lyrics of their hard-hitting catchy rock-infused anthems.

"ANTI-HEROâ€™s music has helped me so much on an individual basis â€“ they put light in my dark days, and even more light in the good days. They are not just a band; they are four people who I look up to. Much love to them."
â€“ Mich Elik, Creator, ANTI-HERO Fansite

Dubbed as the '21st Centuryâ€™s Answer to Nirvana' (CoverZone Magazine, USA), ANTI-HEROâ€™s raw unapologetic attitude harkens back to a time when music, like any other art form, was inspirational, not sold as a commodity.

With their passionate presence, and commitment to delivering music with meaning, ANTI-HERO continues to raise the standards for musicians everywhere.

"ANTI-HERO is the heart of what music was meant to be. Passion. Drive. Dedication. Inspiration. And always presented with a positive message."
â€“ Jackery Schlifer, ANTI-HERO fan

Comprised of Nic VanH, Perryâ€™s bombshell blonde sidekick on Bass & Backing Balls, Jesse Tomes, the groupâ€™s Lead Guitarist, Arranger & Comic relief, and finally, Todd Stewart, more commonly known as T-Bag (yes, there is a good story behind this one folks) keeping it loud, consistent, and in perfect tempo on drums, ANTI-HERO is not your average rock quartet.

As Perry explains, "We try to promote â€˜following oneâ€™s dreamsâ€™ as one of our strongest messages. We write what we know â€“ how we feel, and who we are as people. We donâ€™t write your cliché love and hate songs, but rather, with our music, we try to pay homage to the artists of the past who have made the industry what it is today. We are not here to fit into any molds, or preconceived notions of what it means to be in a female-fronted band. This is real rock with real attitude, and we are real people just trying to tell our story, hoping we can reach others with what we say."

ANTI-HEROâ€™s definitely primed to take on the music biz, and with their impressive D.I.Y. ethics which have earned them accolades of success, seeing them crowned as rock and roll royalty will surely be no surprise to anyone.

In a time when the music industry is over-run by copycat artists selling their souls just to become the next flavour of the week, ANTI-HERO, like Nirvana, remains true to their vision: playing the music that they want.

Screen name:
anti_hero
Member since:
Jun 12 2006
Active over 1 month ago
Level of commitment:
Touring
Years together:
4
Gigs played:
Over 100
Tend to practice:
2-3 times per week
Available to gig:
2-3 nights a week
Age:
36 years